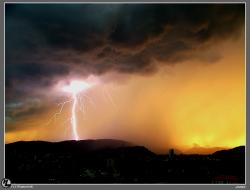 In order to preserve the pre-tannin tea without requiring it all to be poured into cups, a second teapot is employed. The steeping pot is best unglazed earthenware; Yixing pots are the best known of these, famed for the high quality clay from which they are made. The serving pot is generally porcelain, which retains the heat better. Larger teapots are a post-19th century invention, as tea before this time was very rare and very expensive. Experienced tea-drinkers often insist that the tea should not be stirred around while it is steeping (sometimes called winding in the UK). This, they say, will do little to strengthen the tea, but is likely to bring the tannins out in the same way that brewing too long will do. For the same reason one should not squeeze the last drops out of a teabag; if stronger tea is desired, more tea leaves should be used.

The addition of milk to tea was first mentioned in 1680 by the epistolist Madame de Sévigné. Many teas are traditionally drunk with milk. These include Indian chai, and British tea blends. These teas tend to be very hearty varieties which can be tasted through the milk, such as Assams, or the East Friesian blend. Milk is thought to neutralise remaining tannins and reduce acidity.

The order in which to make a cup of tea is a much-debated area. Some say that it is preferable to add the milk before the tea, as the high temperature of freshly brewed tea can denature the proteins found in fresh milk, similar to the change in taste of UHT milk, resulting in an inferior tasting beverage. Others insist that it is better to add the milk after brewing the tea, as most teas need to be brewed as close to boiling as possible. The addition of milk chills the beverage during the crucial brewing phase, meaning that the delicate flavour of a good tea cannot be fully appreciated. By adding the milk afterwards, it is easier to dissolve sugar in the tea and also to ensure that the desired amount of milk is added, as the colour of the tea can be observed.

In Britain and some Commonwealth countries, the order in which the milk and the tea enter the cup is often considered an indicator of social class. Persons of working class background are supposedly more likely to add the milk first and pour the tea in afterwards, whereas persons of middle and upper class backgrounds are more likely to pour the tea in first and then add milk. This is said to be a continuing practice from a time when porcelain (the only ceramic which could withstand boiling water) was only within the purchasing range of the rich - the less wealthy had access only to poor quality earthenware, which would crack unless milk was added first in order to lower the temperature of the tea as it was poured in.

A recent medical study found that certain beneficial effects of tea are lost through the addition of milk.